Must Love Cowboys by Cheryl Brooks - Spotlight Excerpt and Giveaway 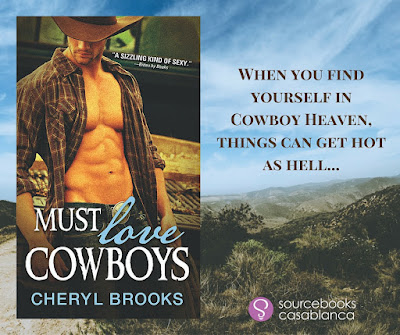 Must Love Cowboys by Cheryl Brooks 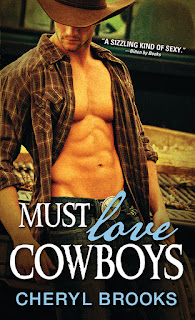 Shy computer specialist, dog lover, and amateur chef Tina Hayes has a thing for firefighters, but when she travels to the Circle Bar K ranch on family business, the ranch’s cowboys have no trouble persuading her to stay on as their cook. Especially not when she learns that brooding Wyatt McCabe—a man who makes her heart gallop like no one else can—is also a former firefighter.


HOW DOES SHE KNOW HE’S THE ONE?

Wyatt’s sizzling embraces leave Tina breathless. But being surrounded by a passel of smokin’ hot ranch hands can be complicated. With so many cowboys courting Tina all at once, Wyatt must prove to Tina that she belongs with him. 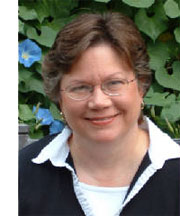 Cheryl Brooks is a former critical care nurse turned romance writer. Her Cat Star Chronicles series includes Slave, Warrior, Rogue, Outcast, Fugitive, Hero, Virgin, Stud, Wildcat, and Rebel. She is a member of RWA and IRWA and lives with her husband and sons near Bloomfield, Indiana.


Cheryl’s Tip for Dating a Cowboy

Since we can safely assume that most of you aren’t the type to be at home on the range, here’s a city girl’s tip on the fine art of dating a cowboy:

Even if you’re a rocker at heart, try to develop an appreciation for country music. This is most likely the kind of songs he’ll be playing on the radio in his truck, and you’ll be much happier if you learn to enjoy it. You don’t have to know the words to every song you hear, but being able to sing along with “Redneck Woman” can’t hurt your chances any. If you’re already a country music fan, you’re one step ahead of the competition.

Excerpt from MUST LOVE COWBOYS

“Uh, Tina,” Wyatt began. “Listen, what you said about a massage… That actually sounded pretty good.” He paused, seeming reluctant to admit he needed help and even more reluctant to ask for it. “Think you could…?”

I stared at the bowl of pie dough. I didn’t need to invent a reason why I couldn’t stop what I was doing and rub his sore shoulder for him. But at the same time, I had this itch to get my hands on something other than dough.

And some itches must be scratched.

“Sure. Just let me wash my hands.” I put a plate over the bowl to keep the dough from drying out, then washed and dried my hands. When I turned toward Wyatt, my worst fears were realized.

He’d taken off his shirt and stood facing me, the broad expanse of his muscular chest, lightly dusted with dark, curly hair, fully exposed. “Where do you want me?”

Heat sliced through my pelvis, stealing moisture from my mouth to send it gushing from my core. My attempt to swallow failed utterly. “There at the table is fine.”

He would probably smell bad after being on the road all night and most of the day. Bad smells usually put me off immediately. I figured I was safe. But when I moved closer, he smelled fine. Not freshly showered, perhaps, but nice. “Do you have any ointment to put on it?”

“There’s probably something around here somewhere, but for now, just use a little olive oil.”

I was hard-pressed not to laugh out loud. Getting my hands on a hot, studly cowboy might make my temperature soar, but by the time I’d smeared him with olive oil, he would smell like a salad.

Not sexy at all.

Unfortunately, after dribbling oil on his back and placing my hands on his shoulders, I was forced to revise that assessment. Wyatt would’ve been sexy even if he’d smelled like a barn. And salads, on the whole, were quite tasty.

I squeezed my eyes shut, trying to block out the image of the powerful-looking muscles in his back and shoulders, but I couldn’t hide them from my hands. His hair, although relatively short, curled at the nape. Using the excuse of massaging his neck, I touched it. For some peculiar reason, that affected me even more than touching his skin had done—the gesture was more intimate, somehow.

Eventually, I found the sore spots in his upper back and shoulder and kneaded them hard. Wyatt’s groans and sighs were like candy, enticing me to keep going until I’d thoroughly massaged every muscle in his body. Twice.

After a glance at the clock proved I’d been at it for about twenty minutes, I figured it was time to quit or I was bound to do something really stupid—especially since he was getting to me on a level no real man ever had. Surely twenty minutes was enough. Then again, he wasn’t asking me to stop. If anything, I got the distinct impression he wanted me to keep going forever.

But I had work to do, a pie to bake, and chickens to roast. “H-how’s that?” My voice was hoarse and hesitant, no doubt due to the parched state of my mouth.

Despite his long, shuddering exhale, his throat sounded tight when he spoke. “Good—um, better. Much better. Thank you.”

I took a step back as he got to his feet. “Glad I could help.”

Rather than staring at the floor like I normally did, I made the mistake of tilting my head back and making eye contact. His gaze held mine for a long moment. Once again, what went on behind those enigmatic eyes was anyone’s guess. He certainly wasn’t giving me any clues.

A flick of his brow signaled the end of the interlude. “Well then. I guess I’ll leave you to it.” He slung his shirt over his shoulder. “I might lie down for a bit before dinner.”

All I could do was nod. I waited until his retreating footsteps died away before letting out the breath I was well aware I’d been holding.

I would get used to him eventually.

Yeah, right. Maybe by the time my car was packed and I was two hundred miles down the road.

Men had always made me nervous, but when it came to getting under my skin, Wyatt McCabe took first prize. Closing my eyes, I breathed deeply for a few moments before resuming my task. I still had a lot to do in the next two hours. Letting Wyatt freak me out wouldn’t help get it done.