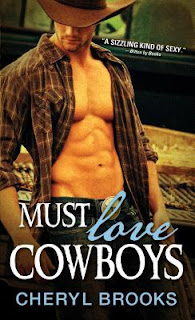 Description:
Shy computer specialist and amateur chef Tina Hayes travels to Circle Bar K ranch to scatter her father’s ashes in the Tetons of Wyoming. Once there, her father’s old army buddy and his cast of cowboy ranch hands persuade her to stay on as the ranch’s cook for a while. It’s not a hard decision, especially when she meets Wyatt McCabe, a man who makes her heart gallop like no one else. But with so many cowboys to choose from, can Wyatt show Tina that he’s the only one for her?

My Thoughts:
This was just a little too much for me. I wanted to like it more but it's almost a parody of a romance novel. Shy Tina is surrounded by hot cowboys who all want her. It's just over the top and some parts were pretty ridiculous. I don't mind losing myself in the fantasy of a good romance , but a spontaneous orgasm because he walked into the room?? That was a bit much for me. And some of the vocabulary used during the steamier scenes brought me out of the story. I did read to the end out of curiosity, but it was just ok for me.


Where to find the author:

Posted by WiLoveBooks at 6:00 AM