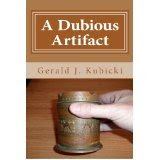 Description:
Colton Banyon is having a good day when he learns that the Chinese and the Effort are after an old artifact that was willed to him by his father. He later discovers that Loni is also tied to the artifact. Written on the old piece of solid gold are formulas that go back thousands of years, formulas that could put the world’s currency and financial stability in jeopardy. His old nemesis, Dr. Carol Thorne suddenly returns and wants the artifact at any cost, but Banyon is one step ahead of her and hatches a plan to protect it. His teams of sidekicks soon appear to help. Unfortunately the Chinese are not so easily put off. Within hours, Banyon’s life becomes at risk and several gun battles ensue. He and his team retreat to a FBI safe house but are discovered and both the Chinese and the Effort attack with an army of killers. Banyon must take down the Nazi leaders of the Effort and defeat the Chinese while protecting the artifact. He does have the help from Wolf, but the spirit tells him that some of his friends may die and he has to make the choices. In the final battle, the unthinkable happens, some of his friends die and he must carry on without them.

My Thoughts:
Banyon and company are in the business of taking out old Nazis and the Effort. In this, the sixth book of the series, they need to keep an artifact out of the hands of the bad guys. This book has lots of action, some mystery, ghosts and curses. The sex-crazed Patel sisters and jealous Loni provide comic relief. This is a fun action read. I have read A Dubious Plan, but it is not necessary to have read the other books to know what is going on.

My Rating: ****
Steam Factor: !!
*Notes: Violence and some blood. Some strong language.