Review: The Redhead Plays Her Hand by Alice Clayton 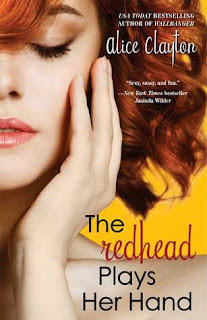 Description:
The third sexy novel in USA TODAY bestselling author Alice Clayton’s playful and erotic Redhead series continues the sizzling romance between actress Grace Sheridan and Hollywood’s hottest leading man Jack Hamilton.
Grace has landed the lead in a new TV series—but when the director asks her to lose fifteen pounds, she goes public with her weight struggles and suddenly develops a huge fan club who support her right to have curves. But between that and the public’s continuing fascination with her “are they or aren’t they” relationship with Jack, Grace begins to wonder if anyone’s really interested in her because of her upcoming TV series, or if it’s all speculation about the size of her ass and her bedroom partner.
Meanwhile, Jack is voted the Sexiest Man Alive and becomes a little too enamored with the party-hard lifestyle. Grace vows to give him the space he needs to find himself, but then he begins to spiral down from lovable Brit to Hollywood brat. People are talking, but are Jack and Grace? Her career is on the rise, and his continues into the stratosphere, but will she be able to catch him if he falls? Will they ever be able to just be a couple who can hold hands when they walk down the street?


My Thoughts:
I love this series. Another great book. Grace is starting on her tv series and is told she needs to lose weight. Jack is partying too much and starting to worry the people that care about him. These are just lovable characters with relate-able issues.  They've come so far since the first book. Once again they prove that they can get through anything. Tears. I just loved this one.


Where to find the author: