Review: No Easy Way Out by Elaine Raco Chase 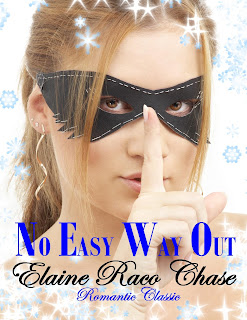 No Easy Way Out

Description:
Engineering robots, and all non-living creatures, was easy for Virginia – not so much with people. So when her best friend dragged her to the company Halloween party, Virginia went kicking and screaming…well as much as her Playboy bunny costume allowed for any movement.

But with her mask in place and her normal reserve as tiny as her costume, Dr. Farrell suddenly let loose. Wild and wanton, she fell into the muscular arms of the costumed and masked Bandit. His virile charms and passionate kisses penetrated her reserve. But at the stroke of midnight, when the masks were to come off, Virginia fled, leaving her bunny tail in the palm of the handsome Bandit’s hand.

Dr. Alex Braddock was determined to find the curvy ass that fit the tail. He was stunned when it appeared that his new boss, Dr. Farrell was his sexy rabbit.

But was it the prim, professional Virginia? She resembled oatmeal!

Or her wanton twin sister? She got turned on by the navel in an orange!

This romantic comedy is a laugh-a-minute, with a team of fairy godmothers that would make any Cinderella blush and a surprise twist in the middle that makes for no easy way out!

My Thoughts:
What a fun read! Serious, genius, Virginia never has any fun. Her friend convinces her to go to a masquerade party, she has a steamy time on a balcony with a bandit until the clock strikes midnight and she runs off like a fluffy-tailed Cinderella. Then the bandit turns out to be her new co-worker and she and her friend invent a twin. So funny. Things do get more serious, but I was satisfied by how things turned out.
The narration for the audio is fantastic. The narrator does a great job with the voices, Virginia's friend Diane in particular. Lots of fun to listen to.