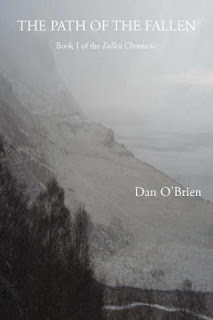 This week, I would like to welcome Dan O'Brien, author of The End of the World Playlist, Bitten, Cerulean Dreams, The Journey, Juxtaposition and The Path of the Fallen (reviewed here).


About The Path of the Fallen:


The world is broken. The coming of the Intelligence pushed the remnants of humanity deep into the tundra. What remained was a vast sea of ice and the machine city, Culouth. E’Malkai Armen, descendent of the Fallen, has been a citizen of Culouth his entire life. A bitter betrayal, and the inception of a war that will destroy millions of lives, forces E’Malkai to confront the past and undertake a pilgrimage that is his by birthright. As he travels to the cold tundra of the north, the realm prepares for war. The Path of the Fallen is a lonely and arduous path, but it must be walked for the sake of all mankind.

Describe your ideal writing space. How does it compare to reality?
My ideal writing space would be a wood cabin the Big Horn mountains in the dead of winter with tea and a smoldering fire. There would no distractions. I would be able to get up early in the morning and take a long rung and then write until the sun went down.

My current writing space is quite nice as well. I transitioned an extra bedroom into an office with a an exercise bike, some training equipment, and my computer. I like to take breaks and train or cycle. It keeps me focused.


What is the first story you remember writing and what was it about?
The first story I wrote I cannot recall the details and it has been passed on as a kind of family story. I made a play for my cousin's birthday, complete with a set and little characters I had hand-drawn and glued to popsicle sticks.

The first story I can remember the plot of was a fourth Back to the Future movie that I combined with a sequel to the movie Darkman. Apparently, I was very fond of those movies. (laughs)


Name a memorable book from your childhood. Why is it memorable?
I would say a Wrinkle in Time or perhaps Dune. Both has a lasting impact on me in terms of the types of stories I would continue to tell as a I matured as writer and a person. I loved science fiction and fantasy then, and not much has changed.


If you could ask any writer (living or dead) a question, who would it be and what would you ask?
I would ask Hemmingway if he thought he would have been as good of a writer if he wasn't drunk all the time. Hemmingway is far and away one of my favorites writers, both for his novels as for the life he lived.


If you could pick any of the worlds or characters you have created, which would you want to visit or spend a day with?

That is an interesting question. I imagine I would want to traverse the world in The Journey, as it is a fantastical philosophical journey and I so often find myself engaging in serious discussions about the human condition. This, of course, is balanced with a healthy sense of humor, especially about the potentially pretentious nature of being a writer. That being said: probably a world I have not created yet.


What is one thing you like to do when you are not reading or writing?
I am an avid exercise nut. I also love being out in the world and just observing the lives of others. I did my graduate work in psychology, so I have a healthy fascination with human behavior.


What are you currently working on?
I am finishing up the edits on a prequel to The Path of the Fallen entitled Book of Seth. The prequel follows Seth Armen, E'Malkai's father, as he is exiled from the Fallen. Additionally, I completing the edits on The Portent, a novel that is a bit of an enigma in many ways. A rewrite of my YA fantasy novel, The Ocean and the Hourglass, is getting done; as well as finishing up the first draft of Drained, the sequel to my bestseller, Bitten. 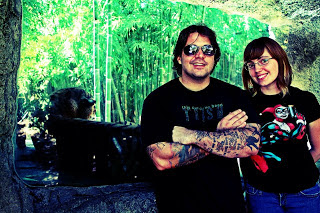 Bio:
A man much smarter than myself thought that certain questions should be answered in order to understand a person. A writer is a very unique sort of person. Often reserved and solitary, a writer does not always give away much about themselves.

That being said, here is a little bit about a writer named Dan O'Brien.

Who is Dan O'Brien?

I am an editor, writer, and psychologist. I currently work at a national magazine, Empirical, in northern California. I have written over 10 novels, several screenplays, and am working on a graphic novel. A philosopher and martial artist, my days are filled with writing and training.

What does he write?

I am an eclectic writer who dabbles in many genres, though most have sweeping elements of scientific inquiry and reason. Most of the novels fall into the categories of science fiction and fantasy, though there is something for everyone. Romance, horror, young adult, and even drama have found their way from my mind to paper.

Why does he write?

I write because I am compelled to do so. The great dream is to write fiction that influences and inspires those who may not have a voice. Wishing to help the world through the written word, I write tales and stories that many audiences will enjoy.

How does his experience color his writing?

Born in Connecticut, I moved with my family several times over the course of my childhood. Having lived in several states and attended many institutions, I have a unique perspective of the human condition. Each new place, every new relationship, has allowed for me to paint from a rich easel of colors. A lifelong practitioner and enthusiast of martial arts, elements of Eastern culture have found a home in my works.

Where does he see himself with respect to other writers?

Considering myself delightfully average, I do often find myself opinionated when it comes to modern fiction. Most of what I write seems displaced from time, reminiscent of the years when science fiction and high fantasy ruled the paperback realm. I have been told that I have the writing tenacity of Jack London, in his zeal to produce as many stories as possible.

Who are his major influences?

When I was growing up the works of Steinbeck and Hugo played a large part in my love of the written word. The likes of Jordan, Goodkind, and Tolkien have played an important role in my grasp and love of fantasy. Phillip K. Dick and Herbert contributed to my love of science fiction. Lately, McCarthy and Chabon have helped me to craft my modern style.

What inspired him to become a writer?

Reading the great works in my youth, I developed both a love and a desire for writing. Comic books, movies, and anime have helped shape and drive my love of the written word. With a strong desire to make great fiction and be a part of something eternal, writing remains foremost in my interests.

I am interested in being successful as a writer. Not necessarily in a financial sense, but such that readers come to enjoy my work. My great hope would be to help resurrect the love of the written word and great fiction. Collaborating with other writers is at the top of my list, as well as helping to contribute to writing communities and those wishing to help the world.