Review: Rules of the Game by Elaine Raco Chase 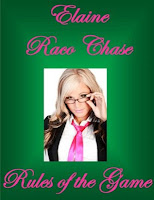 Rules of the Game by Elaine Raco Chase

She tried to ignore the fact that his deep voice hit her behind the knees and made her feel oddly off balance. And she was sure those heart palpitations were the result of drinking two five-hour energy drinks in less than 30 minutes and definitely not from a pair of broad shoulders, green eyes, and a sexy stubble.

He was way too cynical, thought he knew it all, and had her reaching for three Excedrin and a couple of Tums in less than five minutes!

Samantha Logan, he decided, was the proverbial sexy librarian fantasy - with dancer's legs and a curvy ass. Her blonde hair was piled precariously on top of her head, held in place by a bright yellow pencil. A few flaxen wisps had escaped, teasing against a softly rounded face. Square blue-tinted eyeglasses highlighted even bluer eyes. She was smart, sassy, way too funny - and she had no idea she was all that.

When she pulled the pencil from her topknot, he watched her hair untangle and drift down to her shoulders, in a sexy-just-out-of-bed, mess-me-up-more tumble. Adam hadn't realized he was even holding his breath, until he coughed in relief.

Right now, she was mad! Her bare foot angrily tapping against the carpet. And way too sexy - he tried to blink that observation away. There was nothing left to do but apologize. But she had looked him straight in the eye and insulted him!

Even after two tours of duty in Fallujah, Adam wasn't sure he could handle a woman who: wrangled a team of SEALS for the Wounded Warrior Project; was banned from singing, humming, or playing golf, had an oven timer that played Beethoven's Fifth; loved all things chocolate way too much; preferred puppy kisses over his; and owned a moose named Morti.

There was only one thing for this Marine to do– man up, take her down and demand a zerbert – whatever the hell that was!
My Thoughts:
Great characters and lots of fun. I love Sam. She is fun, sassy, and quirky. She keeps Adam on his toes. I liked when he told her he needed to download Urban Dictionary to understand her. She's not afraid to tell him when he needs an attitude adjustment. And he takes it all in stride, which is why they are a great couple. If you like light, funny romance with some steam, I definitely recommend.

As for the audio, it was great. The narrator, Rachel Logan, was easy to listen to and she was just fantastic. I would look for other books narrated by her.

Where to get it:
Audible
Amazon