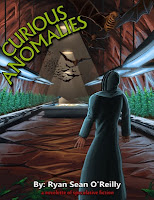 Description:
Rick Silvano, an anxious young geneticist, has gotten himself entangled with a violent, South American, drug-lord named Diego Peres. Rick’s talents have been enlisted by Peres to create genetically enhanced watchdogs, by combining common moustache bats with Africanized honeybees. Everything has gone smoothly for the last three years until now, the night before Peres is due to inspect his investment. Clive Pinkerman, who hosts a late-night, radio conspiracy show, announces on-air that he is going to break into the genetic laboratory to uncover a massive alien conspiracy he believes is housed there. Suddenly, Rick must juggle his time between stopping Clive, and making sure the experiment works so that the temperamental Peres will not be displeased.

My Thoughts:
A cool little story about what happens when you mess around with nature. The author did a great job of building up the suspense. Bats creep me out anyway. I may have nightmares now. A fun, creepy, short read.