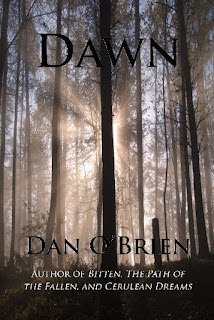 Synopsis: The world is divided between a nation of men and a nation women, each of whom rules with absolute authority. A war brews deep beneath the surface of the peaceful negotiations between these two nations as a love blossoms between a princess and her guardian, a slave of the Society of Dawn, in the first entry of this romantic fantasy series.

An excerpt from Dawn:
Aurora had never journeyed so far alone. In the six years that Aeschylus served as her guardian, she left Pa’ngarin no more than a handful of times. She touched her saddle horn and rubbed the pearl there delicately.
She thought about the day Aeschylus was chosen as her guardian. It was her twelfth birthday, a milestone among maidens and Children of the Dawn. Her aunt, the Lordess Ascendant, the beautiful and powerful ruler of Pa’ngarin, picked Aeschylus for Aurora from among the horde of unseasoned and dirty men who worked the mines and fields.
Her aunt’s words were soft that day.
Soft speech wasn’t Lordess Ascendant’s way. However, on the day when Aurora was presented before the Court of the Nine Blossoms, she spoke in hurried, loving words. She told the young maiden that this man was the strongest among the bloodthirsty and hate-mongering species of men.
He would protect her until his death.
Her new guardian would be her steadfast companion for as long as she saw fit. He would see to all her needs; and if she required, be her First––marking her ascendance.
Aurora smiled as she remembered young Aeschylus. He was already a man when he was appointed as her guardian. Strong-jawed and tight-lipped, he was a cordial, but removed, warrior just a moon past his eighteenth birthday.
At the time, she didn’t know that Aeschylus followed her around long before he became her guardian. His mother died in the same Scythian raid that killed her mother when she was an infant. Every time young Aurora wandered without supervision, Aeschylus wasn’t far away.
But his assistance had a price.
When he was only thirteen, he carried Aurora from the orchards after she fell down and injured her foot. It was against Pa’ngarin law for a man to touch a woman without consent, especially to treat her as if she were powerless to help herself. His act of compassion earned him ten lashes at the center of the Court of the Nine Blossoms. After that incident, he became more careful, making certain to remain hidden from view as he protected her.
Aurora shook herself from her reverie.
Along the side of the road sat a heavy black stone etched in sparkling silver lettering. The letters read Ma’oren.
Ma’oren was a rich town built around mining and forestry operations and run by a minor ascendant named Eris. Aurora couldn’t remember having met her.
Rows of tall trees obscured her vision to the north and south, but she had little fear in her heart despite the circumstances of the previous evening. The silence enveloping the surrounding forest would’ve been disarming if Aurora didn’t know that mining drove the creatures of the forest deeper into the woods. There were few dangers to a woman of her station in a society governed by women. If she were attacked and kidnapped by brigands, they would swing in the Court of the Nine Blossoms.
The trees lining the road soon gave way to cramped male dormitories built upon each other like sloping cliffs. The buildings had no windows except for a wide opening on the second floor.
A man stepped out of one of the dormitories’ slanted doors. His long gray hair was pulled back into a tight ponytail and his brown eyes, wide and wise, watched the young maiden pass. He didn’t meet her eyes, but instead stared intently at her mount. He knew the penalty for looking at a woman, if not asked to do so, was the sealing of the eyes.
Opposite the dormitories stood a vast cavern dug deep into the earth, beside which sprawling mining equipment was placed. A piercing whine filtered from the mine’s entrance, as if a whistle were being blown deep below. Aurora spurred her mount forward through the haze of dirt and dust spewing from the mine and made her way up the road toward the city proper.
As if by magic, the haze disappeared and a gleaming citadel rose in the distance. A dawn sphere was a great, ribbed structure composed of symmetrical, ivory pillars from ground to sky.
Get it today on Kindle! 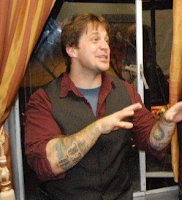 Dan O’Brien has over 50 publications to his name––including the bestselling Bitten, which was featured on Conversations Book Club’s Top 100 novels of 2012. Before starting Amalgam Consulting, he was the senior editor and marketing director for an international magazine. You can learn more about his literary and publishing consulting business by visiting his website at: www.amalgamconsulting.com. Follow him on Twitter at @AuthorDanOBrien.