Taking Liberties with Myths and Legends 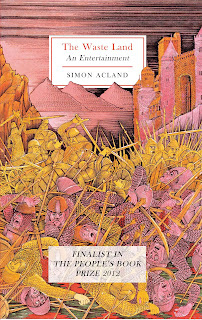 Taking Liberties with Myths and Legends
By Simon Acland, author of The Waste Land

The history in my First Crusade novel The Waste Land is pretty accurate. I enjoy reading historical novels in part for the insight they provide into real events, and the feel that they give for life at the time. So I have been careful to try to achieve verisimilitude, going back to the original 12th century chronicles written by the Crusaders, their Muslim opponents, and their Byzantine observers for some of my source material. I confess to using my imagination in the way I have drawn the characters: there is no historical evidence that Duke Godfrey de Bouillon liked drink and women; indeed he is often portrayed as a saintly knight, but there might be an element of hagiography in that. Nor is there evidence of his rivalry with his brother Baldwin. And I have put my own spin on the shenanigans around the Holy Lance in Antioch. One of the purposes of the modern story of the St Lazarus dons that ‘wraps’ my First Crusade tale is to point out the reality behind some of the less credible historical facts (the First Crusade was full of truly extraordinary events) and vice versa.

Where I have taken some dreadful liberties, though, is with ancient myth and legend. I have taken some stories from Ovid, the Holy Grail myths, the legends about the Assassin sect, and an imaginary Gnostic Gospel, and put them all in a great melting pot (I use that term deliberately, for reasons that you will understand if you read The Waste Land).

Apart from this being quite fun, I have the excuse that I am following in a long tradition. Ovid’s Metamorphoses are based on much older stories from early Rome, Ancient Greece and Asia Minor. He embroiders them, poeticises them and makes them his own. The first Holy Grail tale, the Roman de Perceval , written by Chretien de Troyes around 1180, takes as its major source King Arthur and earlier Celtic fertility legends. These are the inspiration for the father of the Fisher King, whose kingdom is laid waste until the wound in his loins is healed. Chretien de Troyes died before he finished his masterpiece, whereupon other writers took his story and rewrote or completed it. Robert de Boron, writing around 1200, was the first to mix in Joseph of Arimathea and make the Grail the vessel used by Christ at the Last Supper and to catch his blood when he died on the Cross. The German Wolfram von Eschenbach was arguably the first person to bring the Templars into the mix in his Parzival. If you are interested in the way these myths and legends have developed, have a look at Sir James Frazer’s great anthropological study The Golden Bough, or Jessie Weston’s From Ritual to Romance.

In modern times, renewed interest in the Grail was sparked in 1982 by Baigent, Leigh and Lincoln’s The Holy Blood and the Holy Grail. This faux history set off the idea that the Grail – the ‘San Graal’ – was the bloodline of Jesus – the ‘Sang Real’ – which was continued by Dan Brown in the Da Vinci Code. And of course there have been many variations on the theme, mixing in Assassins, Templars and even extraterrestrials.

But the element of the tradition which I like most is perhaps TS Eliot’s The Waste Land, from which I have borrowed my own title. Part of Eliot’s genius was to mix imagery from Ovid and the Grail to create a timeless masterpiece. He references Frazer and Weston as key influences in the controversial ‘Notes’ to his great poem. In homage, I have used snippets from Eliot’s poem for my chapter titles, and hidden 23 direct quotes from the poem for Eliot enthusiasts to find.

If that all sounds very pretentious, don’t be put off. My The Waste Land is a humble adventure story, or, as I subtitled it “An Entertainment”.

ABOUT SIMON ACLAND
Simon Acland worked as a venture capitalist for over 20 years and wrote several books on investing and leadership. The Waste Land is his first novel. For more information, visit his website at: http://www.simonacland.com/wasteland.htm.


**Review for The Waste Land
Posted by WiLoveBooks at 4:00 AM