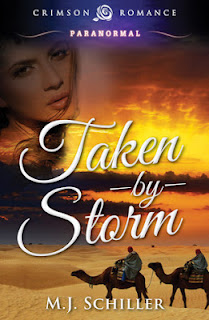 This week's featured author is M.J. Schiller, author of Taken by Storm


Born from the fire of a palace coup, the relationship between the king of Avistad’s son Prince Tahj and the captive girl Bashea burns with a passion that neither of them quite understands. The pair is drawn closer together as they face enemy soldiers, a screaming panther, even the scathing winds of a desert storm.

After what she has been through, Bashea is afraid to trust and her fiery nature is both what appeals to Tahj and what drives him crazy. It takes a long separation to bring them back to each other, but when Tahj does return, it is once again during a battle with his greatest enemy, Lord Boltar. But now Lord Boltar, who has been forced beyond reason by Tahj’s success in retaking the throne, is an even more dangerous threat than before. Reunited, will Tahj and Bashea be strong enough to defeat their twisted and powerful enemy?

I loved it. You can read my review here and see the book trailer here.

Now for my favorite part. The questions:

Describe your ideal writing space. How does it compare to reality?

I think I wrote my ideal space into a book. The romance author character had a brightly-lit office with floor-to-ceiling bookshelves on two sides of the room, and those ladder things on rollers. On either side ofthe arched window behind her desk was a framed cover from one of her books. Her desk was big, and organized, and clutter free. However, I did kill her off in the first chapter, whereas I’m still hanging in there. So I’ve got that over her.
Reality is—I work from the couch. The coffee table in front of me is a mess of loose papers, RWA
magazines, and, at this time of year, Christmas cards. *sigh* But all I really need is my faithful Dell, and a cooling fan, because I tend to burn laptops out.


What is the first story you remember writing and what was it about?

In second grade I wrote a thrilling story about a black cat that always mysteriously appeared when one of the characters was out of the room. Enthralling, but never made the best sellers’ list. Of course, I didn’t do much marketing back then…


Name a memorable book from your childhood. Why is it memorable?

I loved Curious George. He was always getting into trouble, which I was not brave enough to do (at least not then) and the Man with the Big Yellow Hat always got him out of it.


If you could ask any writer (living or dead) a question, who would it be and what
would you ask?

Okay, this is totally cheating, but apparently I have no ethics. I would ask Nora Roberts what I could do to make my work better and then I would have her provide me with a full critique! (A girl can dream, can’t she?)


If you could pick any of the worlds or characters you have created, which would
you want to visit or spend a day with?

Ooh, easy! I would spend a day with Chad Evans from Trapped Under Ice, the next book I have coming out. It is my rock star fantasy! Of course, I would want him to be as in love with me as he is with Beth, but that should go without saying.


What is one thing you like to do when you are not reading or writing?


What are you currently working on?

I have the first book in my Rockin’ Romance Collection, Trapped Under Ice, with my editor, and am
working on personal edits for book number two, Abandon All Hope. The second book pairs Hope
Cresswell, photographer/journalist, with Chase Hatton, childhood sweetheart turned rock star. Hope and Chase meet years after a mysterious breakup and have to come to terms with the events that took place the night of their senior prom.

Where to find her:

I was born in Overland Park, KS, in the heart of Tornado Alley, and my life has been a bit twisted since.  Actually, it’s not all that twisted, but I’ve always wanted to use that line.  I grew up in St. Louis, MO, went to school at the University of Missouri-Columbia, and moved to Bloomington, IL, fresh out of college, after my husband got a job at State Farm’s corporate headquarters.  I’ve worked as a high school/junior college teacher, personnel recruiter, office manager of a jewelry store, and, for the past ten years, as a lunch lady.  I like to karaoke and attend rock concerts.  I am actively involved at church and spend too much time on Facebook.  I am the mother of a seventeen-year-old, and fifteen-year-old triplets, and have been married to my husband, Don, for over twenty-four years.
I have been a writer all my life.  My first book, which was co-written with Mary Ellen Murphey in second grade, was titled The Black Cat, and was written on blue hotel stationary, hole-punched, and bound by white yarn.  I believe it is currently out of circulation.
When I turned forty, I had an epiphany of sorts.  I realized those bigwig publishing houses in New York were now probably run by people younger than me, so I shouldn’t be intimidated by them.  At about the same time I was watching one of those award shows, and Jaclyn Smith got up to give a post-humorous award to Aaron Spelling.  She credited him for encouraging her to go into acting, saying something brilliant like, “Reach for your dreams.”  Nothing new.  Almost even seems a little Jiminy Cricketish.  But, for some reason, it struck me that night.  When Aaron Spelling was thirteen, he was probably just like any other acned thirteen-year-old.  But he worked to achieve his dreams, and became a household name.  So, I began to write.  Once I finished my first book, I wasn’t able to stop.  I would rather write than do just about anything else.  After all, you get to make people (characters) do what you want and design your own happy endings.  What power!  What a privilege.